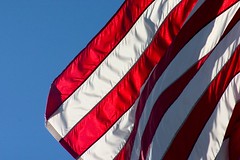 I never thought much of Veterans Day when I was growing up. I never had a family member or even a friend of the family that was in the service. I mean I knew that it was important and that keeping those who have served and protected our country in our thoughts and prayers was important. But it wasn’t until a few years ago that I really realized how very important it is and that it shouldn’t be limited to just one day out of the year.

Both my brother and sister have served and are serving in the U.S. military. My brother was a Marine and has since gotten out and is living a civilian life, but as they say ‘once a Marine, always a Marine. This is true and I can see it some of things he says and does. I’m proud of my little brother and all that he has done.

My sister started out joining the reserves as a way to help pay for college in the 90’s and she did her one weekend a month readily. Things in the world changed though. 9-11 happened and suddenly we found ourselves in the middle of a war and troops were being called up left and right.

While she was away we wrote letters to one another and talked on the phone whenever we could. While she was there things were very difficult. They didn’t have supplies for a while, no running water, no bathrooms. People got sick, lost weight, and other illnesses I’m sure. My sister didn’t talk to much about it, but it wasn’t hard to tell how things really were and how they were affecting people there.

To this day she talks very little about what went on while she was in Iraq and she’s been home almost 6 years now. I’m curious of course. But when she’s ready she’ll share her story with us. I know that she has struggled with an injury that happened while over there and that there are emotional issues as well. Nobody can ever say that war doesn’t affect a person in some way and if they do they’re liars.

My sister is still in the military as a reservist and has been active duty up until recently. I’m proud of my sister and all that she has done to help protect us and our country.

So, first thing this morning I called my sister to wish her happy Veterans Day. She’s home with her family, they’re a military family, enjoying their time together.

And to all the Veterans old and young I thank you for all that you have done and are doing. You deserve more than just a single day.