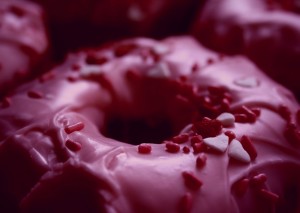 It was a big one. Probably one of the biggest fights that they ever had and this one… and just a week before their wedding.

Jake couldn’t even remember how it started as he walked down the sidewalk, glancing in the store fronts as he made his way to the beach. All he knew was somehow one moment they were talking, the conversation got heated and then eventually one thing led to another and they were yelling. She ran to the bedroom with tears in her eyes and slammed the door behind her just before she locked it.

He was angry and left the house, slamming the door behind him as well.

Jake didn’t take long to cool down. He never stayed mad for long, he saw no reason to really. He didn’t see the point in staying mad with someone since life was too short. You never know what’s going to happen.

On his way home Jake stopped in front of their favorite bakery. The went there every Saturday morning for the homemade donuts.

There was something special about those donuts. Soft on the inside, slightly crisp on the outside, and just plain delicious. He got his plain or with a bit of chocolate glaze and Becca always got one that was smothered in some sort of frosting and sprinkles. A smile came across his face as he entered the shop.

“Hi there,” the clerk said with a smile. “You’re kinda early… it’s only Thursday.”

“I know,” Jake replied as he looked at the various treats in the cases.

“Hmm… do you have any of those donuts?” Jake asked looking around for them.

“Just finished a fresh batch! How many?”

He thought for a moment. “Six. Three with lots of frosting & sprinkles and three with chocolate glaze.”

She moved to the back and returned quickly with the box of his tasty treats.

He paid the clerk and left for home. When he got there Jake found Becca curled up on the couch with her book and she didn’t look up at all when he came in.

“Hey,” he said softly. “I bought you something.”

“What?” She asked without looking up.

He sat down next to her. “Here,” he said as he handed her the box of dounts.

Becca looked up at him and smiled. “I can’t be mad at you. I’m sorry.”

They curled together on the couch and finished the donuts. Every last one of them.