50 years ago on a warm and humid day in Washington D.C. more than 250,000 people marched for jobs and freedom, it was the largest demonstration ever seen in the nation’s capital, and one of the first to have extensive television coverage.

People from all over our great country and from many walks of life marched all the way to the from the Washington Monument to the Lincoln Memorial, to hear Congressman John Lewis, Rabbi Uri Miller, President Synagogue Council of America, Matthew Ahmann, Executive Director, National Catholic Conference for Interracial Justice, and most importantly Dr. Martin Luther King Jr. speak that day.

The heat that day was oppressive when the large crowds were factored in and people could be seen wading or sitting on the edge of the reflective pool just to cool off a little. But there was little to deter everyone from taking part in such an important and monumental occasion. Today, that is something that most would not even dare to attempt. 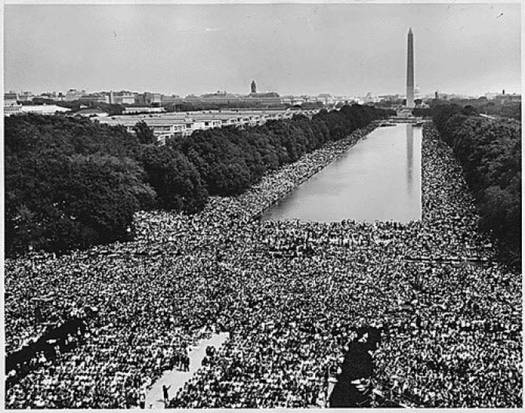 This past weekend while watching the Face the Nation this past Sunday morning there was segment about the 50th anniversary of the march on Washington. I’ll be honest…  I didn’t even know that this special date was coming up. It’s not a national holiday or something that is marked on the calendar for so many to remember and celebrate, but it should be. It was a huge turning point in history and deserves recognition.

While watching Congressman John Lewis spoke with Bob Schieffer about his time with Dr. King, the speech that he gave and how he changed it because Dr. King told him that it did not sound like him. And even though he changed the speech it was still considered controversial at the time.

The revolution is at hand, and we must free ourselves of the chains of political and economic slavery. The nonviolent revolution is saying, “We will not wait for the courts to act, for we have been waiting hundreds of years. We will not wait for the President, nor the Justice Department, nor Congress, but we will take matters into our own hands, and create a great source of power, outside of any national structure that could and would assure us victory.” For those who have said, “Be patient and wait!” we must say, “Patience is a dirty and nasty word.” We cannot be patient, we do not want to be free gradually, we want our freedom, and we want it now. We cannot depend on any political party, for the Democrats and the Republicans have betrayed the basic principles of the Declaration of Independence.

He also reflected on the march on Selma, Alabama where he was beaten and thought that he wouldn’t make it out alive, and the progress that the civil rights movement has made and what Dr. King would think of it now.

What would Dr. King think of where we are now? Would he believe that progress has been made? Would he see that there is equality for all no matter what color, race, sexual orientation, or whether your male or female?

If you ask me the answer is no. I do not see equality for all. Many will disagree with me and others will agree… I suppose that is just the way it is when it comes to controversial topics.

There is still self-imposed segregation or segregation when drawing neighborhood/school district lines. I’ve even heard of towns in the south having separate proms because they’re not school functions that are organized by students and parents. These segregated events reflect historic and lingering racial divides a reality that is hard to ignore.

Take a few minutes and listen to the message the Dr. King delivered today 50 years ago. Listen, learn, and be inspired to lead change.

Just a little note… the I have a dream part of his speech was not in the written version. It added that in as he spoke.