I just finished another novel! That makes almost 10 this year so far… a pretty darn good accomplishment if you ask me! The latest was called Imperfect Pairings by Jackie Townsend.

Touted as a romance novel based on the write up it quickly grabbed my attention and I thought that I’d love it. 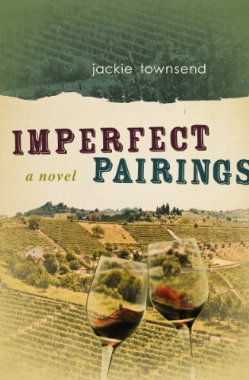 In “Imperfect Pairings” a woman’s love for an Italian leaves her confronting this question. He’s Jack in America, but he’s Giovanni in Italy; understanding him means understanding his culture, his language. It means losing the foundations of her identity to become entangled in the deep-rooted vines of his family’s troubled past when she’d vowed to remain disentangled. Her career and autonomy had always come first, and she fell in love thinking she could control it, not give in to it. Is she losing herself? Or is she finally giving in to the woman she’d been all along.

Was it a romance? Eh… sort of. It was one of those books that I start reading and think that it’s just to slow to keep on reading but I read and then as I get further into it I’m pulled in because I want to know more.

Jamie and Jack, the main characters, are both very intelligent and driven people who put a lot of effort into their jobs. It’s their jobs that brought them together in a secret relationship until they get married to help Jack stay in the country. Of course they’re in love with one another but it’s an odd relationship to say the least. It’s not a relationship that I would want for myself as it seems to cold… contrived. It lacked the deep love & warmth that relationships have.

It wasn’t until the end of the book that the two of them actually started acting more like a couple than two who were together for mere convenience. It was then that I actually started to really like the characters and wanted to know what happened with them…. and then the book ended. Yes, ended.

Overall, I thought that it was a pretty good book and I’d recommend it if you’re looking for something to pass the time.

I received this advance copy of this book through Net Galley in return for my review. All thoughts and opinions are my own.