Today I have my first guest poster for the Fall Favorites series! This is very exciting because I have a great line of of bloggers who will be sharing their Fall Favorites with you.

Thank you Ashley for offering to be the first guest here and sharing a tasty looking recipe. I appreciate it greatly!

Please welcome Ashley from It’s Fitting where she blogs about the life of a stay at home mom of two wonderful kids, cooking, photography, and once in a while chickens. 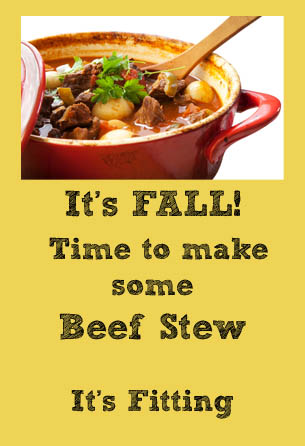 It was 43 degrees the other morning at my home. Forty-three. I going to assume that Fall has actually arrived (even though it will be around 75 today) and that Winter is going to be right on its heels.

With all that rain and cold and dark and brrrrr.

To compensate for the impending approach of winter, I’ve started making beef stew.

Now if you’ve never made beef stew before, it really is the easiest thing in the world. You have the option of making it a Dutch Oven, like I did, or prepping it on the stove and throwing the ingredients into a slow cooker. Whichever way you choose to do it, it does take some time to cook. Otherwise it wouldn’t taste so good.

I generally start making my stew in the morning on the stove and then have it simmering away until dinner time. The other way is to make it up the day before and throw it into the slow cooker, set it, forget it, and about 10 hours later you should be good to go. It’s going to depend on how much time you spend at home (as the mother of a 9 month old I’m in nap jail a LOT) and whether or not you will be around to stir and watch an open flame. Also, stew only gets better the longer that it sits and the flavors have a chance to marry.

It’s going to be even MORE amazing the next day, so make enough for LOTS of leftovers.

Also, with your beef stew, you’re going to need to have some killer red wine. A dear friend of mine, Leslie Sbrocco, the Thirsty Girl herself, has recommended some stellar yet inexpensive wine to go along with it.

After all, who doesn’t love to cozy up to the fireplace with a big bowl of beef stew, a crusty, warm slice of bread and a monstrous glass of red wine.

Now when choosing the meat for our stew, you have some flexibility. Stewing lends itself to thick, tough cuts of meat, because as they cook, the muscle fibers break down and start to melt into the stew. This, as weird as it sounds, is exactly what you want. I generally buy “stew meat” or a chuck eye/arm chuck from our local CSA. It’s going to be a cheaper cut of meat, which means we can stretch a dollar with this meal too. Just make a lot of it and you will be eating it for days.

2 pounds of meat – Make this either stew beef, chuck eye, or arm chuck and make sure to cut into bite size pieces if it isn’t already.

2-3 cups of Red Wine, about half a bottle – Drink the other half while you cook.

2 Cups of Beef Stock – This is going to depend upon how much wine went in, how many veggies you’ve put in and how long you plan on cooking it for. I generally use enough to cover the contents of the oven/slow cooker by about an inch… cooking is not an exact science add more or less if you think it needs it.

3-4 Large Carrots – large dice – If you make the veggies too small, they will cook quickly, which means if you are simmering this for a few hours, or slow cooking it for 10-12 hours, your veggies are going to be mush. Gross.

1 Tsp Salt – This will change based upon your own taste. I try to salt every layer that goes into the pot, but not too liberally. At the end, add salt if it needs it, just don’t over do it.

Season the cubed meat with salt and pepper while your oil heats up in your Dutch Oven or deep skillet. Once your pan is hot (Medium to Medium High) throw in your meat, browning it on all sides. If your pan isn’t big enough to accommodate all of the beef, that’s OK. Brown it in small batches to get a nice crust on it, avoiding lowering the temperature of the pan and essentially steaming it. Yuck. Steamed meat.

Once all of the meat has been browned, remove it and add the onions. Saute for a few minutes until soft, then add the garlic. Be careful browning the garlic as you don’t want it to burn… burned garlic is not so tasty and has a pretty nasty smell. Once the onion and the garlic have cooked, throw in the rest of the vegetables and the meat. At this point, take your open bottle of red wine, pour yourself a glass and then add a few cups to the pan. I like to let that simmer for a few minutes, de-glazing the pan, soaking up all the yummy browned meat goodness and adding serious depth of flavor to the veggies. Keep stirring to make sure you get all of the bits off the bottom but make sure the heat isn’t too high.

Once you have the wine in the pan and the veggies have been simmering in it a few minutes, this is where we reach the crossroads. If you are using your slow cooker, VERY carefully pour these ingredients into the crock pot, add the beef broth, the spices and let ‘er rip. The time you want to cook this really will depend upon your slow cooker and how hot it gets. With mine, I set it on low for 10-12 hours, but keep an eye on it.

If you are using a Dutch Oven, carry on. Cover the veggies/meat/wine with 2 cups or so of beef broth and add the spices. Cover and let simmer for a few hours on Low, checking to make sure that it isn’t boiling and that the flavors are coming together as you like them. This is where I will start adding wine, or water, or more spices depending on what I think it needs. Remove the cover and let the liquid reduce slightly, for about 15 minutes.

Not this where is gets subjective. My husband likes our stew to be more like gravy, whereas when I’m eating it by myself, I like it to be thinner, with a more soup-like consistency. If the flavors are where you like it, but the consistency is not, combine a 1/4 of water with the cornstarch and whisk until smooth. Add some hot stew broth to the mixture, stir it up and throw it back into the pot. Let this cook for a few minutes longer and it should thicken up nicely.

Serve this over egg noodles, or by itself with a loaf of hot crusty bread.

For drinking, the Thirsty Girl recommends a bottle of Cotes-du-Rhone, a lovely French red wine. Specifically look for either Chapoutier – Belleruche, or Jaboulet Parallel 45. Both of these wines are less than $12 and an excellent accompaniment to your rich meaty stew. You should be able to find them at BevMo or other wine shops, and I’ve even seen the Jaboulet at Trader Joes!

Cozy up to your honey, grab a seat in front of the fireplace and enjoy your hearty, home cooked meal. 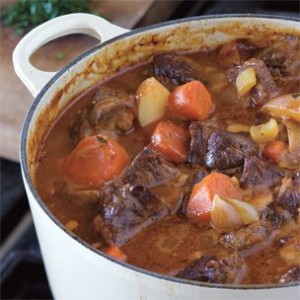