Welcome back to Monday!! Now, don’t get me wrong I still feel that Monday should be part of the weekend, but since I can’t change the way the world seems to run the next best thing would be to be happy about it.

Lately, I’ve been on a hamburger kick for some reason… mostly in search of the best hamburger that a restaurant has to offer. I try to make burger but it seems that everyone can make a burger better than me so this week I made meatballs instead. I know… I know… they’re almost the same as a burger, but it’s just not the same.

These meatballs are based on the recipe for meatloaf that I made a couple of weeks ago from the Pioneer Woman but with a few changes to make it even better after a phone call I had with my sister. We call each other to plot out what we can make for dinner or what kind of unique recipe we can create. It’s a fun game really… that and pondering all the great meals we’d make if we were closer that our families won’t eat.

Follow the directions that the Pioneer Woman has for meatloaf in her recipe, leaving out the parmesan cheese. But before mixing it all together there are a few special ingredients that you need to add in….. 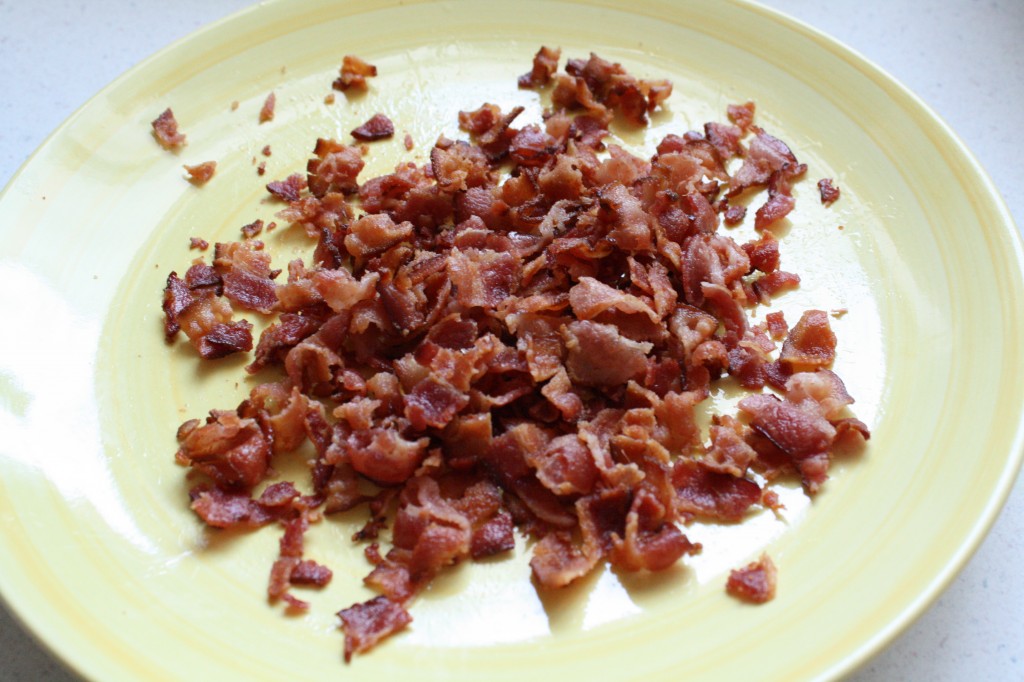 Bacon! why… everything is better with bacon! 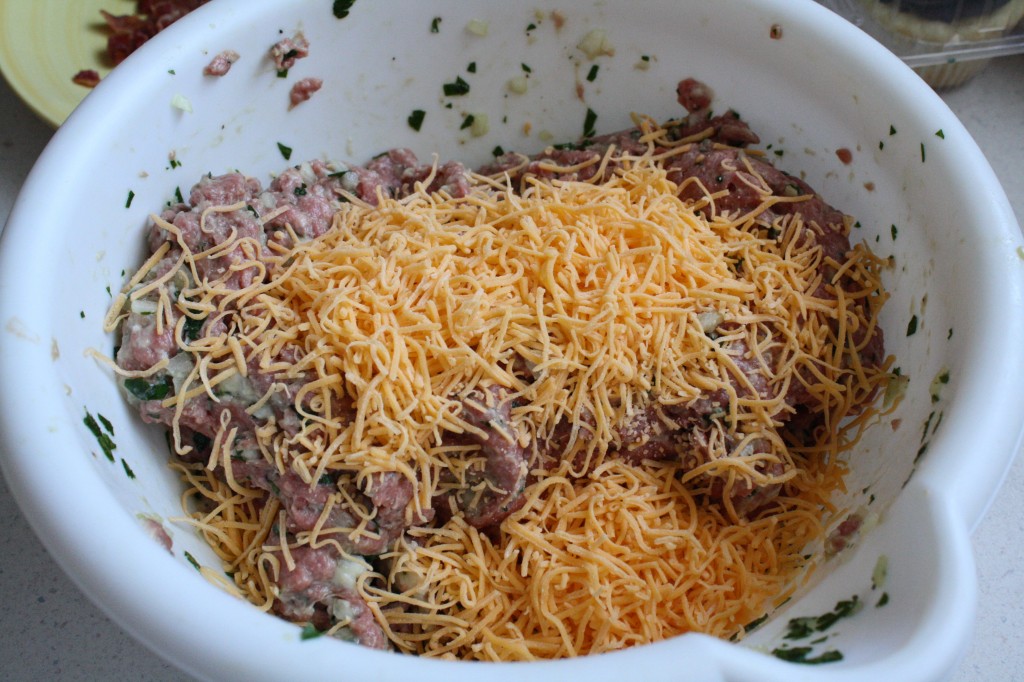 Add these two amazing items in and you have bacon cheeseburger meatballs! Now roll it into a meatball shape, get your hands a bit wet with cold water to help keep the meat from sticking to your hands helps. 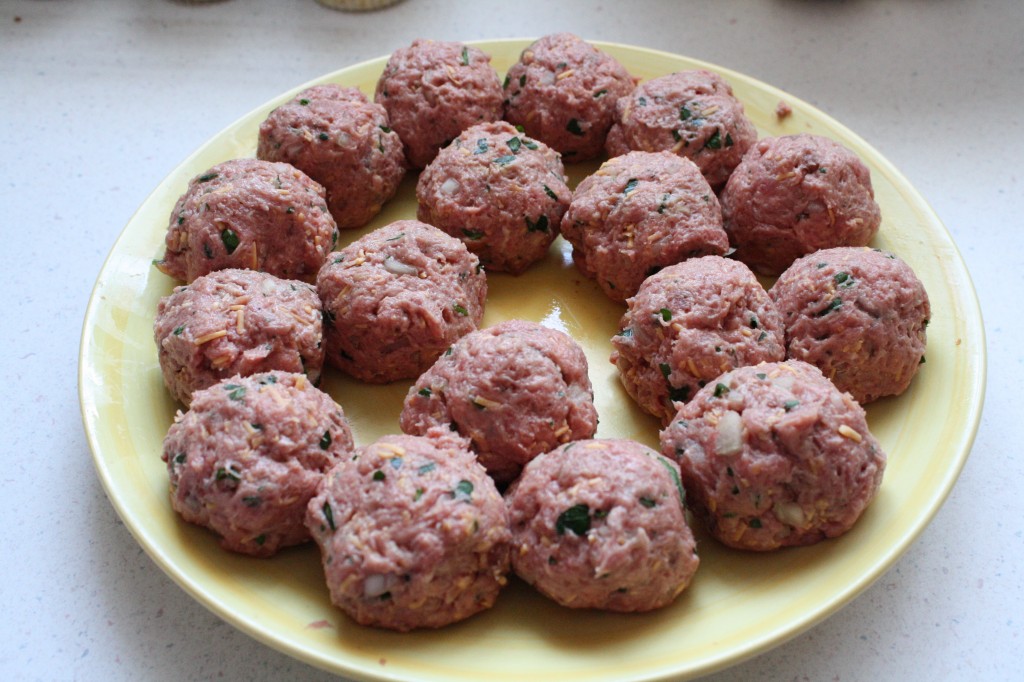 In a large skillet brown the meatballs in batches so you don’t over crowd them. 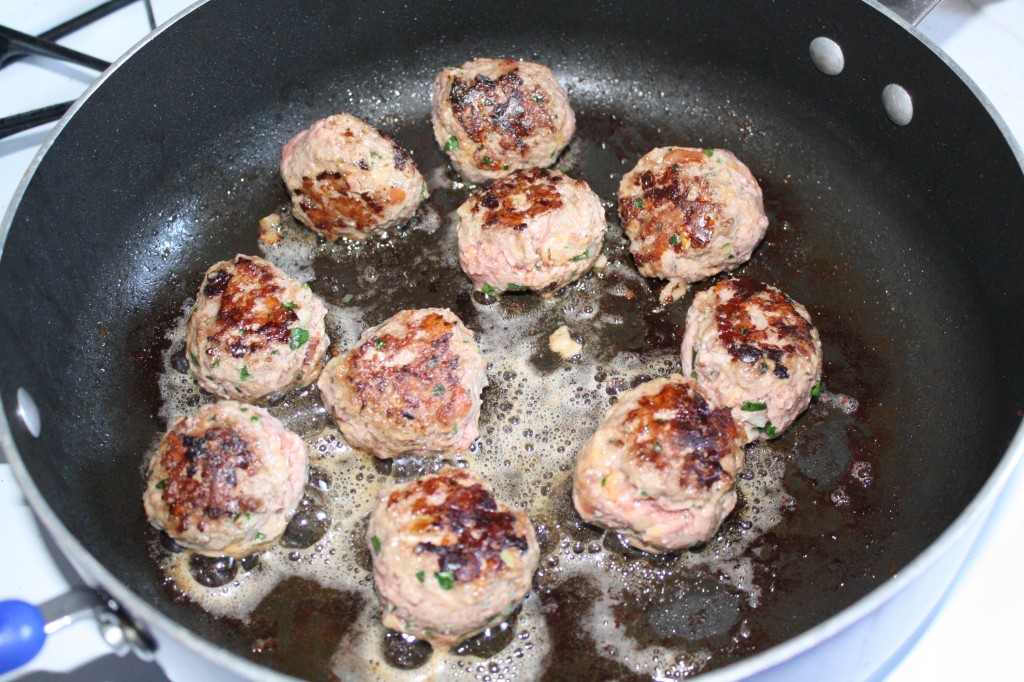 When you have all of the meatballs browned finish them off in the oven for about 20 – 30 minutes depending on how big they are.

While the meatballs are in the oven start the mac & cheese. Now you can use your favorite recipe or you can check out mine… Okay… it’s not really mine. But it is my go to recipe  and I’m always adding this or that, changing it up for something different. For this meal I left out the broccoli and chicken and used 3 different kinds of cheddar cheese. YUM! Creamy…. smooth… perfect… that is how I would describe this mac & cheese. 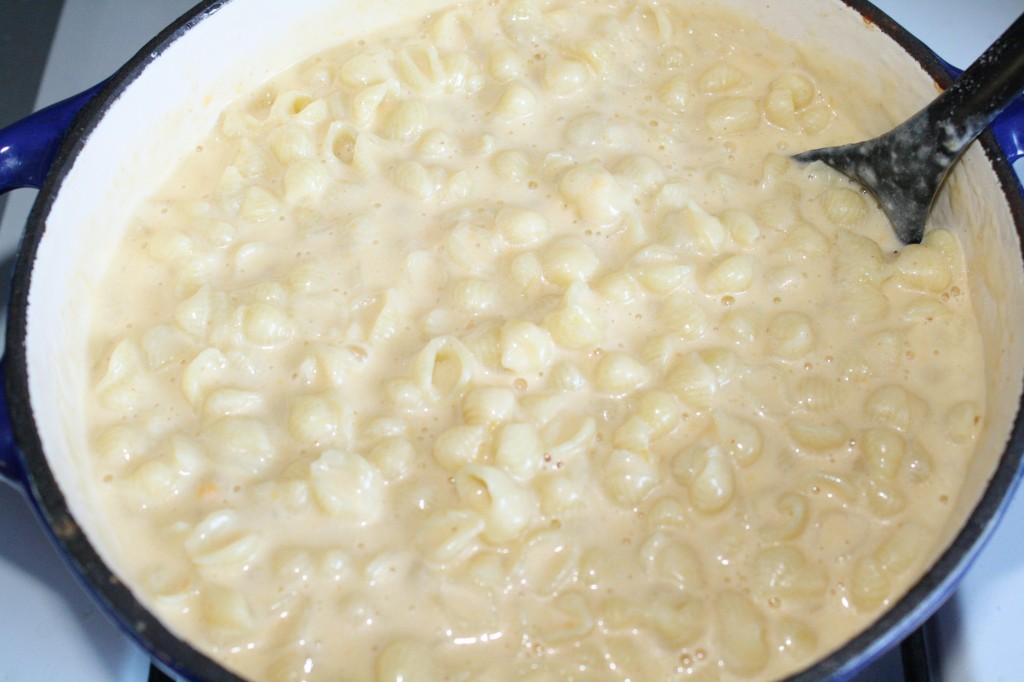 Now the meatballs I served with the sauce that the Pioneer’s Woman recipe uses to top the meatloaf, veggies, and of course the mac & cheese. And the best part…. the family loved it all!

Do you take a recipe and change it up? What is one of your favorite go to recipes?

I don’t know what happened this week but I guess I didn’t make anything that was really worth writing about and of course that leaves me without something awesome to share with you. Don’t get me wrong… I did feed my family but it was all pretty lame stuff… taco salad, leftovers, and stuff like that. We may have even gone out once too.

So, I failed. But I didn’t want to not post something because there are a few things that I made this week I can share with you that were tasty but they were from a mix or a recipe from someone else. 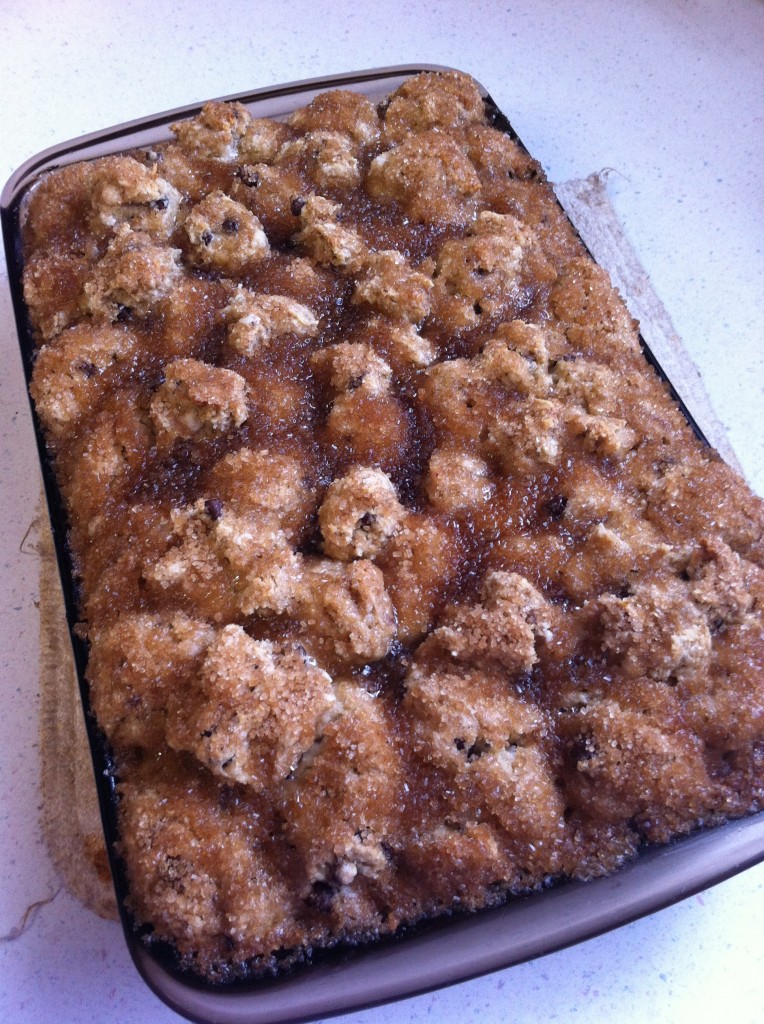 This tasty thing you see above is a banana chocolate chip monkey bread! It’s a mix that I picked up at Target while there a couple weeks ago and let me tell ya… totally worth it! It was warm, gooey, sweet, and perfect for a weekend breakfast with a large glass of milk (because without it you can’t get through a couple bites).

Is your mouth watering yet? 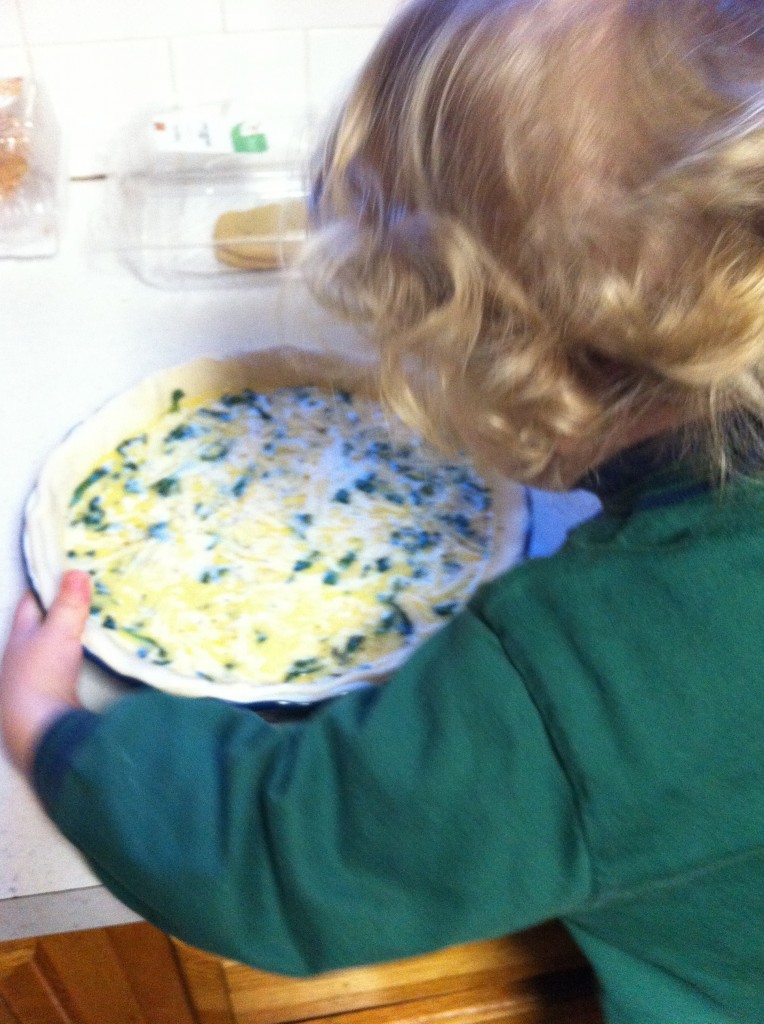 The one thing that I did make this week that was mostly homemade was a spinach and Gruyere cheese quiche. I have to say that it was pretty amazing, but then again how can you mess up a quiche? I mean it’s eggs in a pie crust and if you’re lazy like I am you buy the crusts pre-made and egg beaters to make it simple.

Andrew really loved it… can you tell? He helped me make it by pouring the eggs and stirring it again and again once it was in the pan. I only wish that he would have actually eaten some for dinner… he didn’t even touch it. 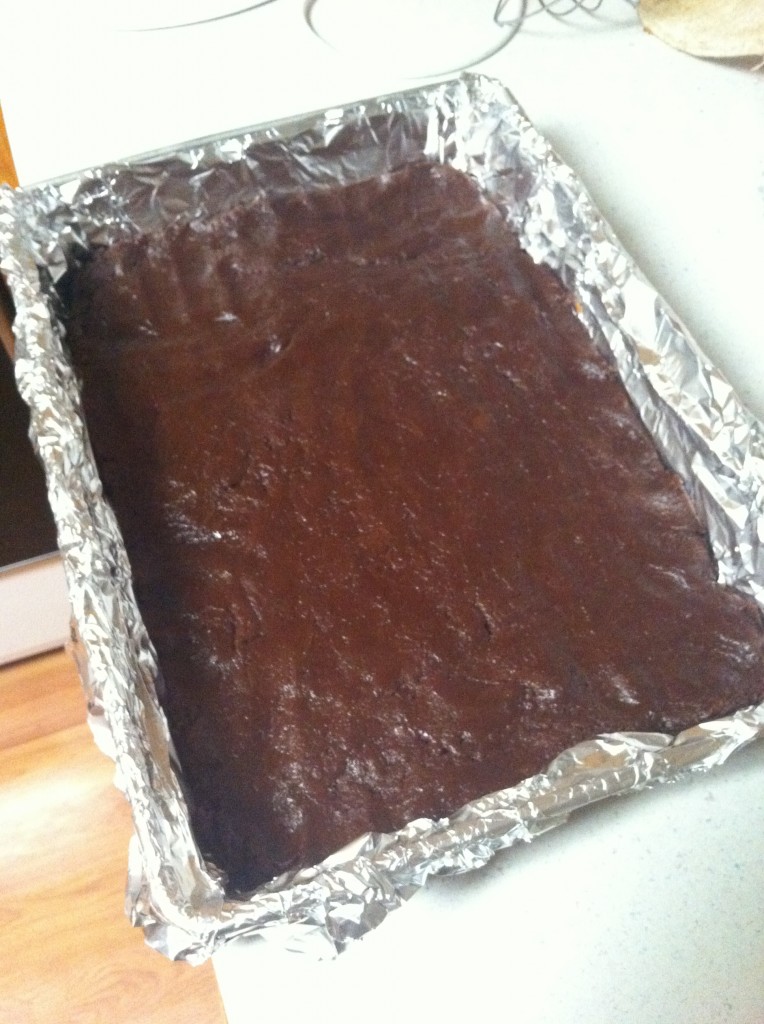 Brownies! I love chocolate (who doesn’t?) and brownies, but because I hadn’t gone shopping last week I didn’t have eggs which we all know are key to making just about anything. Well, I found an incredible brownie recipe that doesn’t require eggs.

These brownies are fudgy and are just like something that you can make from one of those box mixes. The only changes that I made were that I left out the honey, used all white sugar, and threw in some chocolate chips for good measure. Oh! And if it weren’t for my brownie craving I wouldn’t have found the chocolate cake recipe to end all other recipes! Seriously… check out the Chocolate Wasted Cake! 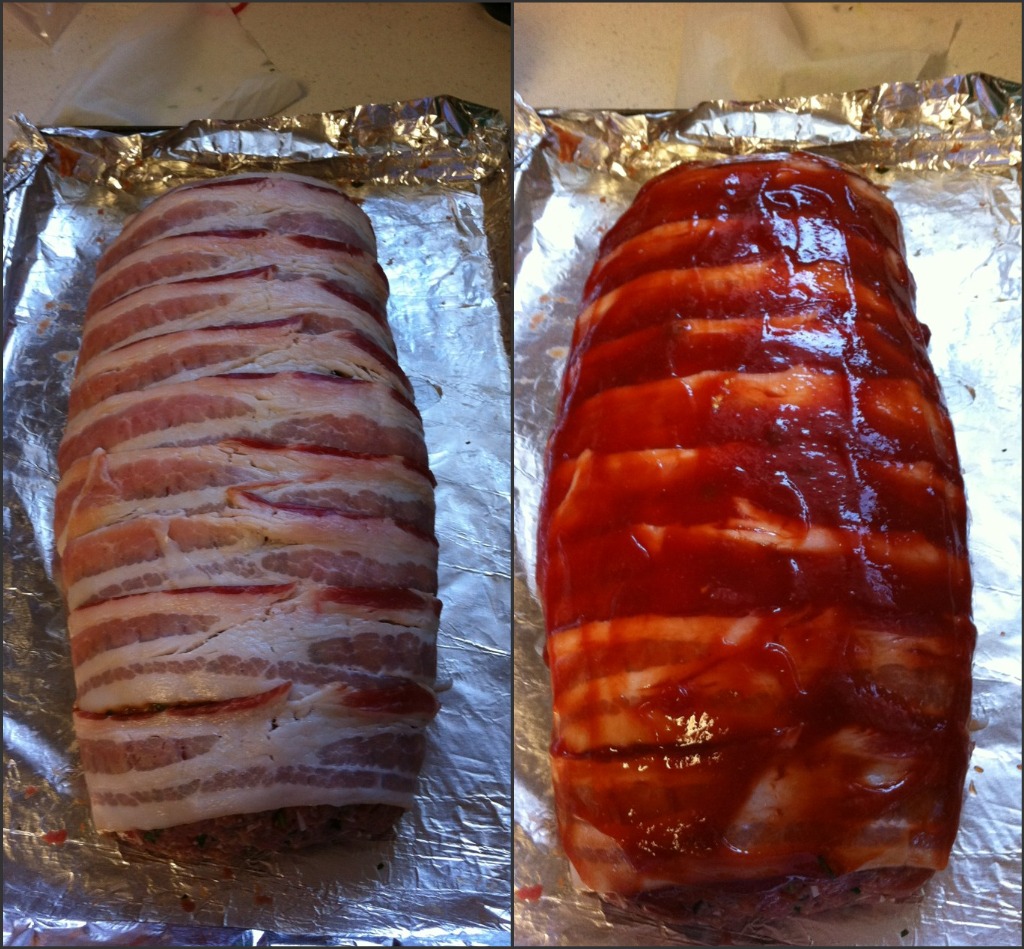 What you see above is the most wonderful meatloaf ever and a huge thanks goes out to the Pioneer Woman for creating this. What is better than meatloaf that is totally wrapped in bacon and then smothered in a sauce that is better than plain ketchup any day of the week? Nothing. The only thing I did different was add onion and garlic because they need to be in just about everything that I make but other than that I did nothing else… I even bought plain old white bread because that’s what the Pioneer Woman said to use! Try it and you’ll love it too!

Did you make anything this week that was awesome?

What do you think… was my week a recipe fail or not?