Today I’m linking up with Kmama,  a good friend of mine that I got the privilege of meeting a couple weeks ago in Chicago at Bloggy Bootcamp, to tell you about one of my proud mommy moments.

Band is a big thing around here and they take it seriously. It’s so big that if you’re not in the band here you’re nobody!

Since the beginning of August my daughter has been at school along with over 200 students at band camp. They been marching and marching through the blazing heat, the rain, and oddly enough through thunder storms and funnel clouds. No worries…. they sent the kids inside and then home. But the kids are dedicated and have put in a lot of work to remain one of the number one high schools in their district.

This is the first year that my daughter is marching with the Trojan marching band (TMB). Freshman aren’t allowed to march and at the end of the year take a playing & marching test before they can get into TMB… see I told you they’re serious here. To say that I’m a proud mama is to say the least.

Caitlin has been in band since she was in the 5th grade and has been first chair & unchallenged since the day she started. She’s excelled in band, as well as other classes, and has won several ribbons for her achievements in various competitions. Honestly, she’s good enough to do something with her music after high school.

This past Friday was the first football game of the season which means that it was also the first performance of the TMB and I was that mom. You know the one in the stands fully dressed in the team colors with multiple camera’s and of course the iPhone in which to quickly share pictures of my kids out of the football field. 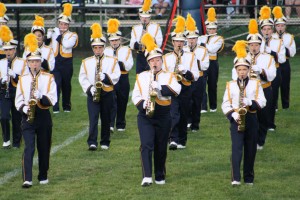 That night I took 2 or 3 videos and over 100 pictures of my daughter, the band, and the football game. See… I told you that I was that mom! But in my defense I wasn’t the only parent that was doing it! 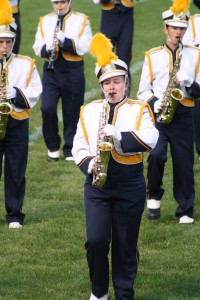 I was lucky and was able to get great seats right on the 35 yard line, 3 rows up right in front of where she was standing for many of the songs that they played. Notice the crooked hat… I asked about that and they’re not allowed to adjust it, brush hair out of their face, sweat off their brow, or anything like that. So she marched with her hat like that for that entire routine. 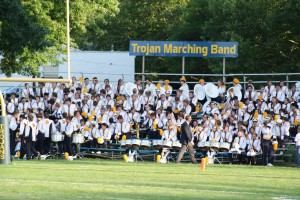 The majority of the band watching the game

When they’re not playing the band sits in the end zone in bleachers that are specifically for the band. They play when there’s a touch down & at other important moments in the game (yea, I don’t know all technical details just that they play).

So tonight (I know it’s a Thursday game because of the holiday weekend) I’ll be in the bleachers with my cameras in hand again taking pictures and video of the band and my daughter. Why? Because I’m a proud mom!

Every year the city I live in celebrates the life and times of James Oliver Curwood with the fun filled Curwood Festival. Now you’re probably wondering who in the world that is, right? He was an author who lived in Owosso and had a Norman chateau replica built on the banks of the Shiawassee river. It was here where he wrote and entertained guests. Now, the castle is a museum of Curwood memorabilia that visitors can check out while visiting Owosso. 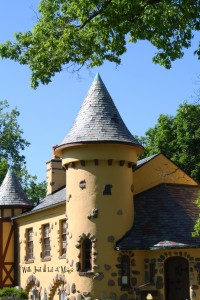 The Curwood Festival is  your typical festival with carnival rides, games, parades, and food. And I love carnival food! I don’t know what it is about it that makes it so good! Elephant ears, fresh made lemonade, and italian sausage with peppers & onions… Mmm! I love the sights, the sounds, and the smells of it as I walk through.

Of course as with anything there is a downside to the three day event… the carnies and all the riff raff that seems to come out of the wood work this time of year. My kids like to say that they all come out from the sewers and then head back down until the next festival starts. I suppose that it’s a good theory since we don’t seem to see them any other time of the year. 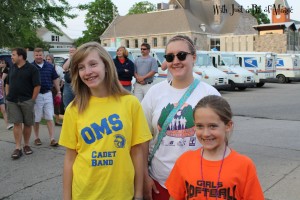 The girls after the Kids Parade Friday - Cait shed her uniform immediately!

This year was a particularly busy one for us with Caitlin playing at the opening ceremonies with the freshman band, all three girls were in the parade on Friday night (there are two parades), we wanted to watch the big parade on Saturday & ride the rides (there is never a way out of this other than rain), and Sunday my oldest was playing downtown with the high school jazz band. 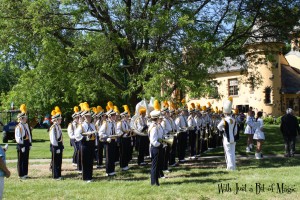 We all have a pretty good time I think… except for those few moments (hours) where Natalie lost her cell phone. I am so surprised at how honest some people are because we checked with the carnival office throughout the night and someone finally turned in her phone! The lost phone resulted in us sticking around until 10pm while the girls rode rides and searched for the phone. Which didn’t seem to bother them all that much but their brother was getting pretty tired! 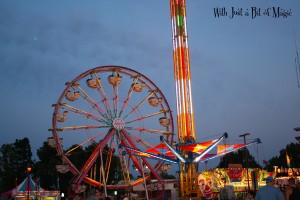 This year we had some special guests here who came to celebrate the 50th anniversary of Main Beverage Company here in Owosso. I know that for years they’ve been trying to get them here and it hasn’t worked out till now and they were a huge hit with everyone young and old. 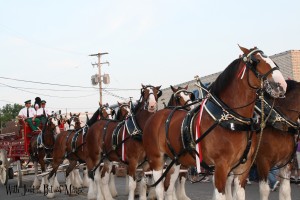 The Clydesdale horses are beautiful animals. They were so well mannered with all the people hovering around them and the noise of music & carnival rides, but I suppose that it’s something that they’re used to since they travel all around the country to various festivals and events.

I think that fairs, festivals, and carnivals tend to bring out the kid in all of us. They’re fun and can bring us back to a simpler time when we were young and free.

Do you go to the fairs that are in your area?

Today I was up at the ungodly hour of 4:30am to take my oldest two girls to school so that they could take part in the school assembly that started at 4:45am.

What!?!? You ask… well my kids along with all the other kids in our school district have raised 177, 402 pounds of food for the eastern Michigan Food Bank. This is simply amazing and shows how much the kids care about their community and helping out those in need. I am really proud of all the work that my kids along with all the others have done over the past school year.

The local TV station picked up on their efforts a few years ago when it was just the Owosso & Corunna schools (cross town rivals) going against one another to see who could raise the most food. And now the program has grown to include schools from Lapeer, Clio, Flint, Saginaw, and all over mid-Michigan. All of these kids are doing a great thing to help out.

Each Friday a school is featured live on WJRT channel 12 and they compete against one another for the Spirit Cup and the school that raises the most food is the winner. This year Owosso is the winner!

The video is pretty long… like almost 30 minutes long. But it highlights the efforts that the kids in Owosso & mid-Michigan have made throughout the school year as well as footage from this morning’s live coverage.

Do you have a similar program in your community to help out others?