Over the weekend the kids wanted to rent Just Dance 3 for the Wii because I’m a mean mom and haven’t bought it for them yet (or any other Just Dance game… maybe for the holidays). Our big plans for the night were to hang out together and play video games.

This was the first time that I can remember both of my older girls setting the phones down, walking away from the computers, and really spending some quality time together. I really enjoyed it and I think that they did too!

Now, to protect myself from the laughter that would be heard around the world I won’t post any pictures of myself playing the game. It’s to scary and I deleted them and the video that my lovely children took of me. Honestly…. I can’t afford the therapy you’d all need either. 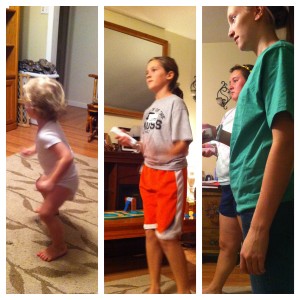 All the kids joined in!

Andrew thought that it was a lot of fun to stand in front of where his sisters were playing and dance! He spent a lot of the evening dancing away. 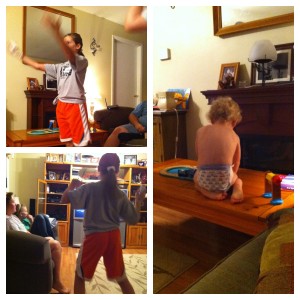 See the pic on the right... that's what happens when I don't pay attention.

Except for the time while I was playing and he decided to climb on the table. I guess it’s easier to play with trains that way.

So here’s the thing…. Just Dance is a serious work out and if you have no rhythm it’s even harder! It just looks like you’re flaying about! But it was a lot of fun and I think that if I were to keep playing I might actually lose weight and look good doing it! Then maybe… just maybe there’d be a picture of me playing the game (don’t hold your breath though).

I think we need to make it a regular family event… maybe even make it into a contest or something fun.

Have you played any of the Just Dance games yet? What do you think of them?
I’m linking up with Liz & KLZ for iPhone Photo Phun because well…. my iPhone is awesome and I take about a million pics a week on it! May as well share them!