Are you ready for a great family fun night game? Hasbro has a new game out called Scrabble Flash and it’s a ton of fun! It’s a fast paced game where you have to line up the five tiles to form as many words as possible in 75 seconds! I’m here to tell you that it’s not as easy as you may think!

You don’t need the traditional board or any of the little letter tiles (that always seem to get lost) to play either. All you need is paper and something to write with if you want to keep score and of course the game.

My daughter and I have played many times (it’s really addictive) and have found that we’ll only get about 1/4 of the words that are possible!

The game can be played in three different ways.

This is a game that the entire family can get in on since it’s for ages 8 and up! I will say that my daughter who is 9 (as of yesterday) had a difficult time especially with the time limit, but she still had fun with it. 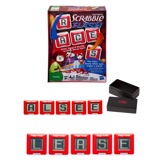 Well, I have one game that is up for grabs!

And I’m going to make it really easy for you to win! All you have to do to enter is follow me via Google Friend Connect and leave a comment that you do AND tell me why you want to win this game!

A winner will be chosen using random.org first thing in the morning on April 1 and their information will be passed on that same day so their game can be sent out to them! So make sure that your email is visible in your profile or leave in your comment!