So you may have read in a previous post where I said that I’m a big Staind fan. It’s true. 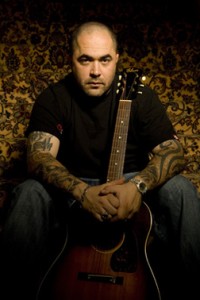 Last week my iPod seemed to know exactly what I needed to hear and was playing Staind and as usual one random thought led to another and I was looking to see when they were in concert again.

It was a happy day! Aaron Lewis (lead singer of Staind for those who don’t know) is going to be here in my lovely state of Michigan, live and acoustic! AND on a Friday night! This last bit is important you see…. being a mom that has to get up at 5ish in the morning to go to work makes it hard for me to do things on a weeknight.

Anyway a co-worker pointed out that Aaron Lewis has an album out and that it’s pretty good. And with that I was off to check it out. It has a country sound to it which is different from what you’d expect from him, but it’s really good.

The name of the album is called Town Line and you can get it for $6.99 on iTunes too!

My favorite song is Massachusetts but I couldn’t find the official video for it so instead I give you Country Boy. After you listen let me know what you think!

Oh… and if you’re wondering where this Melodic Monday thing started head on over to Dysfunctional Supermom’s corner and read about it.