I had this great idea out of the blue yesterday and before I went ahead and implemented it I posed the question to Facebook. Yes… Facebook. You would have done the same thing too, right? I needed to make sure that it wasn’t off the wall or something like that and what I found out was that it’s a pretty good idea.

Another meme. I know.. it’s just what the blog world needs… another meme. But I wanted to write a series of posts called Letters to my Kids and I thought that maybe some of my friends would like to join in on the fun. 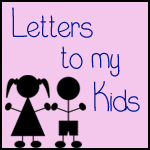 The majority of us have kids, want kids, have nieces  nephews, or are even grandparents and we all have things that we want to say to our kids or wish that we could. Often the trouble is that we don’t know how to say it best or maybe our kids are to young to understand what we’re saying. I know that this is the case with me.

Teens are hard to talk to and toddlers are even more so. Honestly, neither one of them really listen or often care what we’re saying to them half the time and as writers there is so much more that we could say in a letter. There is so much good, some bad, many  hopes, dreams, and expressions of love…anger…and so much more.

I would love it if you shared your letters every other Friday with me in this new meme. I think that it’ll be a lot of fun and there is much to be learned along the way about ourselves, our kids, and life in general.

I’ll post the button and the code over there on the right in the side bar and have the linky open at 6am when the first post goes live next week. I can’t wait to read your letters!

You’re joining me… aren’t you?