Late at night, deep in the dark wood, when the only thing you can hear is the wind howling through the trees there is a flicker of light in a small window.

Very few venture that far into the wood. Those that do find the spooky house that has the single candle lit, they hesitate within yards of the front door. Their fear is so strong that they’re nearly choking on it. The house is small. The windows are old and dirty and it’s incredible that the light can even be seen. But the wood is dark. Darker than is natural so the light is seen.

Everyone knows who lives in that small house. An old woman lives there. Most have no idea of her true age, but she looks no more than mid 50’s. Some say that even though she looks 50 her true age in indeterminable and that she’s been around as long as the wood. She has long red hair, glimmering green eyes, and skin as white as pure snow. A beautiful woman to say the least. But she is a wicked woman. One that you don’t dare cross paths with.

There have been some who have gone out to the house in the deep wood alone, on a dare or something crazy like that. Many of them are never to be heard from again and those that do return are not the same. They’ve changed and they often return to the house late at night.

Until one day. A young man, new to town was wandering the wood and came upon the house. He got closer than most ever did and walked away to talk about it. Once back in town he began asking questions of the house and he was quickly told to never go there again if he wanted to live. He was curious and the towns people never gave him a good answer as to why though. This only fueled his curiosity.

People looked at him with veiled eyes. They were wary of him because of his questions and his curiosity. They whispered behind his back, they knew he’d be gone soon if he didn’t heed their warnings.

The young man went out again to the house and watched. Nothing ever changed though. There was something keeping him from going to the door though.

One day he was there a bit later than usual. Just as he was about to leave the light flickered to life in the window. Fear raced through his veins.

Fear, she thought to herself as she inhaled deeply. She smiled and moved gracefully over the floor towards the door. She could hear his thoughts as they littered his mortal mind. It was something that she had been able to do for centuries, read minds among other well earned abilities.

She knew that she had become one of the most feared, revered, and powerful of her kind and she liked it that way. Being the villain has served her well for years and she had no intention of changing yet.

The door slowly opened and the young man could do nothing but stare at the woman in the door. He was frozen there … like a zombie. She smiled and he thought she whispered something. He moved forward towards her and found himself in the house with her.

So beautiful, she thought. She ran her fingers over his shoulders and then down his back. He shivered. She smiled again.

She was going to keep this one for a while. He could be useful to her. Slowly she pulled him into her embrace, nuzzled his neck as he wrapped his arms around her.

Her tongue flicked across his skin as his breath caught. He suddenly gasped and then moaned in pleasure as her fangs broke his skin and she started to drink. But only a bit. She licked the wound and it healed immediately. She pulled back enough to bite her wrist and feed him. Soon he would belong to her.

He was her companion, her servant, her ghoul. He wasn’t human anymore, but he wasn’t one of her kind. He wasn’t a vampire.

This is my post for Word Up, YO! And the Red Writing Hood. 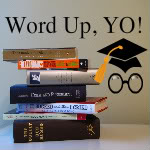