First of all I have to say that when I first saw Heely’s many years ago I thought that they were a crazy idea! But my kids were fully intrigued by them and my middle daughter ended up getting a pair for Christmas. She LOVED them! She wore them all the time with and without the wheels!

When I was given the opportunity to review Heely’s I was pretty excited because I knew that my youngest daughter had been asking for them for a while. She loves trying new things too so this was the perfect opportunity!

So, let me say this… she can’t use them with the wheels in them. She tried and tried and kept tripping all over the place and now… she’s afraid to try again. Which is sad because I think that once she gets the hang of it we’ll never get them off of her feet! I think that we’ll need to watch some of the videos that they have again so she can get the hang of it.

She loves the shoes though! Why… well she’s a girly girl and these shoes are the epitome of all that’s girly! They’re pink, purple, and sparkly! Check these out! 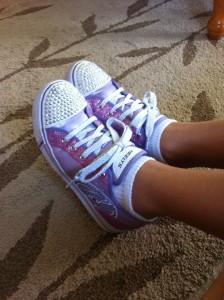 When they came in the mail she was beyond excited about them! It’s funny because she wears her old ones more than these because she doesn’t want to get them dirty! I’ve finally talked her into wearing them more often.

There are a few type of Heely’s. The HX2 shoes have two sets of wheels which are great for younger kids… this makes it a little easier and safer for your little ones who really want to try them out. Then there are the original Heely’s which have the one wheel in the heel and then there’s the Nano which is the first ever inline footboard! 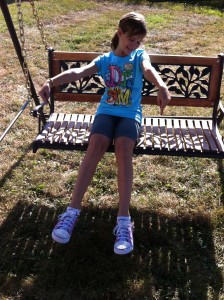 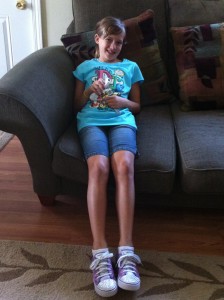 This is about the most activity I was able to get her to do with them! Between not wanting to get them dirty & not being able to ‘skate’ really well with them she isn’t making full use of them…. yet!

I think that these shoes can be a lot of fun for kids of all ages and are a great way to get your kids up and moving. These would make a great gift for the upcoming holiday season too!! And no…. it’s not to early to start shopping!

I was provided a pair of Heely’s for this review. All views and opinions are my own and are not influenced by anyone or anything.