They say that it happens to 1 in 4 pregnancies. 25% of women will miscarry.

I am one of those who make up that statistic and it is one that does not make me happy. I can think of many other statistics that I would prefer to be a part of.

When I had my first miscarriage I was given my options and they were explained to me in full detail and I decided to go fast, painless, and simple. I chose the D & C. I didn’t want to go through the actual miscarriage. I wanted to go to sleep and then wake with it all done and over with.

My decision didn’t make it any easier though and there was nothing that could be said to make things better.

I think that one of the worst things that we had to do was explain it to our girls. I mean what do you say to them, how do you explain it so they understand, and have a way to deal with it. I couldn’t be the one that was there for them because I was barely holding it together myself.

Time passed and the wound began to heal.

We decided that we wanted to try again and like before we quickly got pregnant. I was scared. I worried constantly. Because of the previous miscarriage my doctor got me in quickly and was able to schedule me for an ultrasound and bloodwork right away.

Everything with my bloodwork was great and the early ultrasound looked really good. I started to feel better about everything and started looking forward to everything.

I believe that I was around 6 weeks and had to go in again for another ultra sound and found out that I was going to miscarry again. My heart sank.

Why was this happening to me again, had I done something wrong, was it my age? There had to be something. A reason. But what.

It was different this time though because no baby was actually there. A blighted ovum. You become pregnant but a baby never actually forms and grows.

I was wrong and it wasn’t any better than the last time. It was just as bad. But worse because I decided to let it pass naturally instead of doing the surgery again. Let me tell you that this was not a good decision.

I’ll spare you the details, but it was something that I never want to do again and would not wish it on my worst enemy. It was just like going through labor.

I was shocked. I wanted answers now. I didn’t want to try again only to suffer through another miscarriage.

He told me third time is a charm. I thought whatever.

He was right. I became pregnant and this time everything went perfectly and I delivered a healthy, happy baby boy. 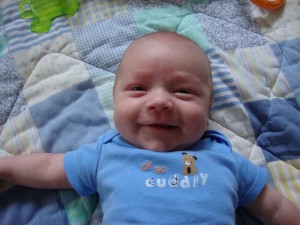 I could never have imagined that it would happen to me. Never in a million years. Not me. Not ever.

We decided right after getting married that we wanted to have a baby of our own, even though I already had three incredible kids and he fully accepted them as his own. We decided that we’d have one baby and that’s because I wasn’t getting any younger and we all know the older you get the more difficult pregnancy is.

It wasn’t long and we found out that we were having a baby. We were beyond elated! Everyone from our parents, the girls, and all of our friends were happy for us. We started planning for the new addition to our family and whether it’d be a boy or a girl and what we wanted to name it.

I was scared as always because I tend to be a worrier when it comes to being pregnant. I never in my life had a reason to worry either, it’s just that there are so many things out there on the internet telling you this and that. All that information can cause you to self diagnose and drive you to insanity! Besides all my pregnancies were great!

My first few doctor appointments went really well and all was normal. Perfection!

We started looking for furniture and all that since I had gotten rid of everything that I had before. We were lucky and found a brand new bassinet at a yard sale and the best part was that they only asked $25 for it.

Our appointment at 12 weeks came and I was excited because it was going to be the first time that we were going to be able to hear the baby’s heartbeat. We went in and got started.

At first it took a few minutes for her to find the baby’s heartbeat. I said to my husband that it was normal to have a hard time finding it because the baby is so small and often they hide.

The nurse figured I wasn’t as far along as we all originally thought so they wanted to do an ultrasound just to be sure. They had an ultrasound machine in the office so it made things really easy for us and we simply moved to the other room.

I was slightly worried.

She came back in and started the ultrasound. We quickly found out that there was a baby there. But our baby didn’t have a heart beat and it looked like it had stopped growing around 9 weeks.

My heart sank. I couldn’t believe what she was telling me. It wasn’t true.

It couldn’t possibly be true. I was heartbroken and couldn’t stop crying.

She let us be alone for a few minutes. After a while we joined her again in her office and we talked about our options. As she explained them I made my decision and then the whole world shifted.