Well, we’ve hit the half way point of the #iwillrockthis weight loss challenge and I’m nowhere close to my goal weight. I’m beginning to wonder if I’ll ever reach it…

Before I had kids I thought that I was heavy at a whopping 130 – 135 and at 5’8″ that’s a pretty damn good weight and not even close to heavy. I was slim, trim, and not a hint of flab anywhere to be seen. Now, four kids later and a lot of years later time has not been friendly to me… I am heavy now, my arms jiggle and wiggle, my thighs are bigger than my 12 year olds waist, ankles… what are they? This is not how I want to look.

This year marks my last birthday because after this one I am going to quit counting them. Yes, it’s the big 4-0. I want to look awesome for my birthday no matter what I do to celebrate it.

The weight loss challenge started out really great and I was losing weight and then this weeks weigh in came and it was a measly one pound loss. One pound! Not the 2 -3 that I had been losing all along. I was eating right, getting exercise, and making an effort exactly as I should be doing. This past week has been a challenge because so many times I’ve just thought about throwing in the towel and just eating what I wanted.

And now here comes the honest part… I did it. I failed…. fell off the wagon…whatever you want to call it but I ate some tasty food that was full of sugar, fat, and more calories that should be allowed. Afterwards, I felt awful. All bloated and icky… there was a definite difference in how I felt. I was tired from the sugar/carb overload and knew that I shouldn’t have eaten like that.

I think that I’ve hit the dreaded weight loss plateau. You know… that place that you reach and can’t seem to move very far from. I need off of the plateau… but how? Do I jump…. or do I roll off?

I want the weight gone and I want to be slim & trim again.

Especially comfort food & sweets. But it’s those things that caused me to gain so much extra weight and not lose it so easily. That is the past though! If you didn’t know I joined up with over 30 other amazing women in a weight loss competition organized by Wendy from Wendy Will Blog.

I have a goal weight, but really it’s more about how my clothing looks and feels and of course the size. I don’t want to be shopping on the edge of the plus size department because while some of the clothes are cute there simply are not as many options as there are in other departments.

Yes, I will! #iwillrockthis! Maybe not this summer but I will be able to wear a swim suit like that again someday!

I am proud to say that since last week I have lost 3 lbs! It’s such an amazing feeling to step on that scale and actually see progress. It makes it all worth it and encourages me to keep on trying and working towards my goal. The first few weeks I simply started by watching what I was eating and tracking calories and this week starting on Sunday I added in exercise each day. Bike riding on Sunday, 30 Day Shred on Monday, and an almost 2 mile walk with my son in the stroller on Tuesday! I’m sore but I feel great!

Because I’ve been cutting out breads, flours, and sugar I’ve had this a major craving for bread so I gave in… I made some banana bread. Whole wheat banana bread!

I was skeptical at first because I didn’t think that it would be very good… to dry or dense considering that it was made with whole wheat flour. I was surprised because it turned out better than any other bread that I’ve ever made! It was delicious, moist, and amazing beyond words. 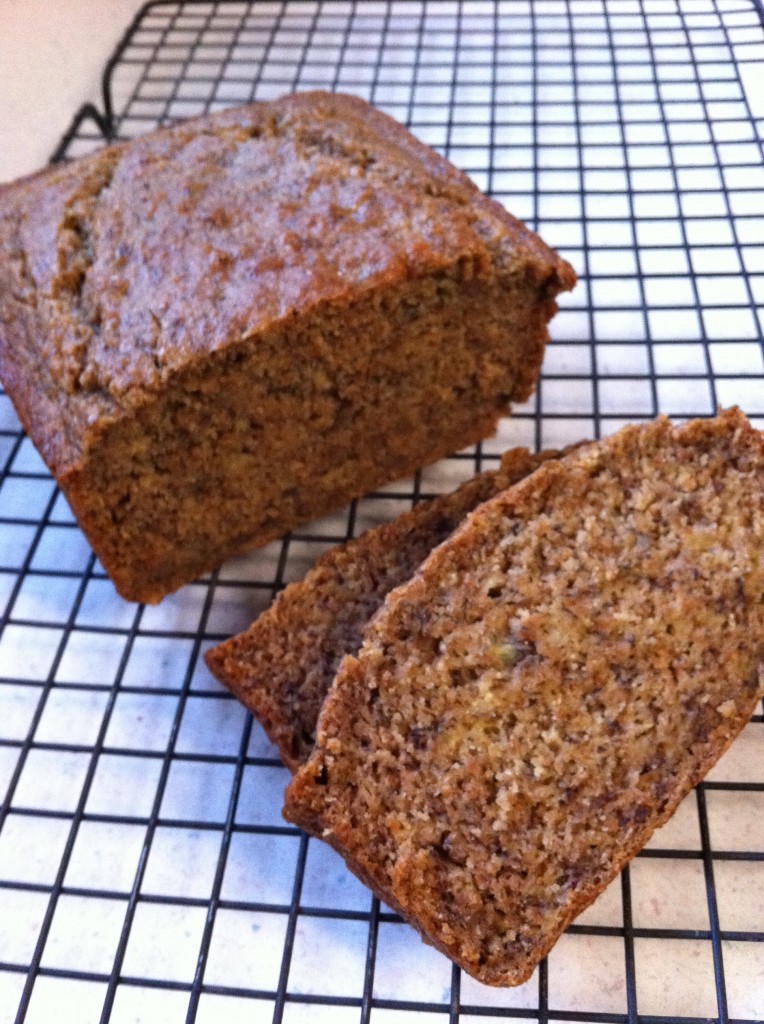 The best part about this bread other than the flavor is the calories in it! One piece is only 105 calories!

How to curb your sweet tooth or carb cravings while dieting?

As always I’m linking up with Seven Clown Circus and Parenting by Dummies for Wordful Wednesday!