Recently, I got this really great new dining room set! It’s amazing. And the best part is that my dining room now looks like a real “adult” dining room. Ya know, the ones with the nice furniture that isn’t old and crappy.

Anyway, that’s not what this is all about. But it is what started it because I emptied the old hutch to make room for the new one. 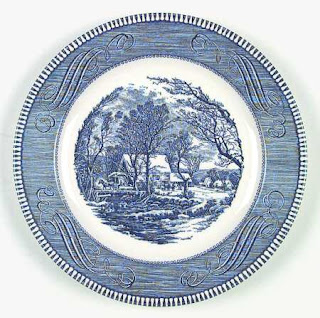 They’re the blue and white Currier & Ives set and they’re the dishes that my grandparents used as their daily dishes. I have so many fond memories of my grandparents and using those exact dishes for big family dinners, for simple things like a bowl of cereal, desserts, and just about everything in between.

Every time we visited my grandparents my grandma would make this soup, it was the instant type out of a box but it was really good. Eventually I learned that it was Mrs. Grass’ chicken noodle soup, you know the kind with the little egg and skinny noodles. As kids we loved this soup and I still do and so do my kids, but we always used those bowls. They weren’t deep though, more big, round and shallow. And then for a snack after that she’d give us fruit with cream cheese. Have you tried it? It’s really good!

Those dishes have always reminded me of my grandparents and those times so when I happened to find some at a local antique store I was so excited. I knew that I had to have them! But here’s the thing, it wasn’t the complete set and they were selling them by the piece which came out to a rather big total price. Sadly, I passed and didn’t get them.

About a year later I was looking through some local classifieds online and happened to find the set of dishes again! This time though it was a complete set for at least 10 – 12 people. There were serving pieces, salt & pepper shakers, gravy bowl, cups, saucers, dessert plates, and even an ash tray! The best part was that they were practically giving it away! I think that we paid like maybe $100 – 150 for all of it. I couldn’t believe it!

My husband went and picked up the dishes for me and from what he said the people just wanted to get rid of them. I felt like a little kid at Christmas! There were boxes and boxes of dishes and I had to go through all of them even though it was late in the evening.

I’ve only used these dishes a few times since getting them and it’s usually when we have a large family meal. I don’t use them mostly because I’m afraid of something happening to them. They hold such great memories for me that it would kill me to have one of them broken, but then again my grandma used them everyday and they survived through 9 grand kids. Maybe I should get them out and use them more often, be a bit more trusting (but watchful!), and enjoy them.

Do you have something special like that? Maybe it was handed down to you through your family or just something that you picked up along the way. Maybe it’s dishes, a trinket, or a piece of jewelry. I’m not talking about a picture though because I believe that those are something different all together.