The dictionary defines willpower as the strength of will to carry out one’s decisions, wishes, or plans. Also, the ability to control oneself and determine one’s actions; firmness of will.

So what does that really mean? It means saying no to that 3rd piece of cake, saying no to that cookie, or saying yes to that new plan you’ve devised and sticking to it. Whatever it may be it’s following through no matter what your inner voice is saying.

Willpower is one of those things that I feel I’m lacking. There is always something I’d rather be doing… and instead of the laundry I’m staring at the television watching something horrible AND eating that piece of cake. It’s the same issue that so many of us have at some point in our lives. 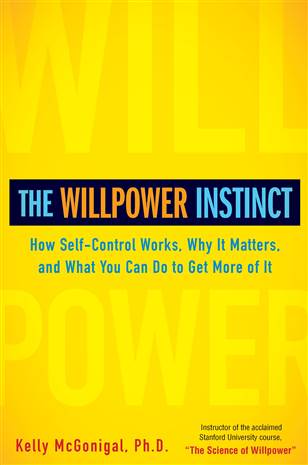 Stanford University psychologist Kelly McGonigal’s book The Willpower Instinct started as a course at Stanford Univeristy’s Continuing Studies program and illuminated why we give into temptation and how we can find the strength to resist it. The course became one of the most popular courses ever offered with corporate executives, teachers, moms, dads, their kids, and everyone in between attending. Out of that class came The Willpower Instinct book.

When I heard there was a class all I could think about was how can I get into that class! Yea… yea… Stanford is a little far from Michigan for a weekly class. But the book…. well, the book is everything that the class is minus the great lectures.

The book is broken down into 10 chapters, just like the class, each with two kinds of assignments to help you learn to become a “willpower scientist”. Actually, she says that you can just read the book through and then go back and read it again, taking your time and doing the tasks and implementing some of the strategies laid out.

With reading a chapter a week and doing the assignments (making notes along the way) it should take you just under 3 months to complete the book… as it would the class. Each chapter describes one key idea to help you with what you want to overcome, the science behind that idea, and then how you can apply it. Sounds good right?

What I like is the Kelly McGonigal uses science and her professional experience to reiterate the important aspects of willpower as well as bring counter-intuitive ideas about willpower.

Is it worth the read… Sure is! Would I recommend it… Sure would! I think that no matter how strong you are and how much willpower you have this could lend a lot of insight into human behavior and how changes can be made that will affect you forever.

I’d love it if you could join us in the conversation about The Willpower Instinct on BlogHer.

This is a paid review for BlogHer Book Club but the opinions expressed are my own.